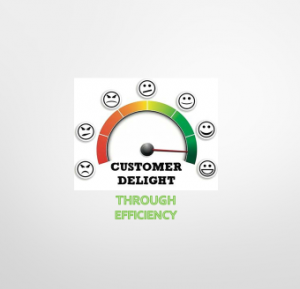 A company I was advising had a problem with a slow response to customer connection requests. Procedures were lengthy and of course, the company people had their reasons.

As a result of these lengthy processes, complaints were frequent, and many of the company people were spending a great portion of their work time handling customer enquiries about the progress of some cases.

While 99% of the cases were straightforward, some 1-2% could be more complicated requiring extra processes. Because the latter could not be reliably distinguished from the start, all the cases, simple and complex, were made to follow the same lengthy procedure making the great majority of the 98-99% suffer from unnecessary steps and lengthier response times.

It was also established that even when the more complex cases entailed taking some extra measures, those were at a very low cost. So cost was not a significant factor. A more difficult for us endeavour was to convince the company to accept that its responses will not be 100% right from the beginning in some of the rare cases and should, therefore, be willing, when that happened, to take immediate corrective measures without any further claims from the customer.

After some discussions, the company saw the point and was persuaded to adopt for all cases the simplified procedure. To distinguish, however, as much as possible the few complex cases, the company asked applicants to provide specific information from the start. Furthermore, even in the event that something went wrong because of misleading or false information, the company committed itself to step in to remedy for the omission taking urgently the necessary corrective measures so as to avoid any inconvenience to the customer.

The KPI for the process improved significantly, the revised procedure created more efficient operations bringing smiles to both staff and customers who were now delighted with the company’s new prompt response.

What we really did was to restore the efficiency of the many by not letting it suffer because of some rare exceptional cases that might appear and which, even when they happened, could easily be remedied. Process efficiency and Customer satisfaction, once more, proved to go hand in hand.